Shafi’s latest venture Makeup Man is the first movie of 2011 which finds home well in the genre of a complete Family Entertainer. From my following of Raju’s fan page in facebook, I was aware of the midweek release and since I had just got done with another exam, felt it would be an appropriate outlet to channel out some 2 hrs of fun. Personally I have had no hard feelings against the actor Jayaram, always enjoyed his contribution to the industry over the years and justifiably welcome his Padmashree status.

Balu [Padmashree Jayaram] is one of those blokes who is broke in life, owing loads of money to multitude of blade companies, one of them run by [Jagathy Sreekumar]. The movie begins with a bit of humor where Balu gets arrested for sneaking to his own rented house in the middle of the night, trying to avoid paying the landlord. He gets taken to the local “Mathrika” station where he gets let off when he narrates his perils. A girl Soorya [Sheela], is in love with him and runs away from home the day before her planned wedding.

Soon they go get help from Balu’s friend [Suraj Venjarumoodu], who is a production controller executive and get married at a temple with the help of some junior artists pretending to be their relatives.

In the meantime, director of the movie ‘Cinderella’, [Siddique] is fed up with the ‘actress’ the producer [Janardhanan] has brought for the movie, the female being some reality show winner. 😉 So he asks her to leave the set and decides he wont move ahead without another worthy actor instead. 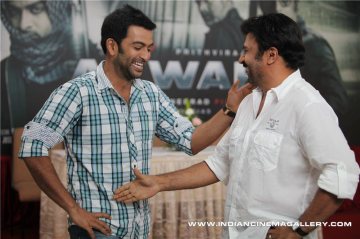 Coincidentally, Suraaj arranges accommodation, just for one night for the newly wed Balu and Soorya in the room where the previous actor stayed. A purely accidental incident wherein the producer sees Soorya go into the Actress room, gets mistakenly convinced, she will be the perfect actress for the movie. In dire need of money, Soorya, who has no clue about acting tries to give it a shot, and once again, theatrically timed coincidence, convinces the director that she is the perfect one for the role.

Here on the movie picks up with real good pace, and Jayaram’s inability to stay with his wife, needing an excuse, he adorns the role of the Actress’ Makeup man, and that is how this movie develops.

As the movie grows on, Soorya becomes aware of her innate talent of acting and is unable to resist offer of a second movie. A couple of misunderstandings, strains the relation between the husband and wife so much so that Soorya aka Anamika [Filmstar name] circumstantially denies ever being married to him, so that she can sustain in the industry.

P.S. The music didn’t impress me much, hence no mention.