Santosh Sivan’s 2011 venture with Prithviraj, under the banner of August Cinemas [Raju’s first production release], is the 2nd biggest budget film [Rs. 20 Crores] the Malayalam Film Industry has ever witnessed -following Pazhassi Raja. The movie released on 31st March at around 70 centres all over Kerala.I managed to be a part of this beautiful historic journey yesterday and proudly adds this to my list of must watch movies of 2011.

The movie begins in a current day situation where Krishnadas [Prithviraj] is partying with his Tamil friend [Prabhu Deva]. They are broke and badly need some money, when they are approached by foreigners [via Nithya Menon] for the sale of Krishnadas’ ancestral property back in Kerala. They take up the advance to sell the place off, and head homewards to complete the sale of the property. On arriving there, they come across an NGO worker [Vidya Balan] who tries to stir his mind away from selling the property. He then gets exposed to some of the tribal men living there, wherein he is forced to listen to the history of his forefathers.

From here on, Santosh begins to unveils his magic. Shankar Ramakrishnan’s script is easy to comprehend and keeps the interest going. We are eased into the history of Vasco da Gama’s visit to Indian soil, his vested interests in Indian spices and the ugly side of the man. One of his ‘foresaken deeds’ was setting a ship that was heading on a pilgrimage on fire and drowning the natives down. The son [Prithviraj as Chirakkal Kelu Nayanar] of a brave warrior [whose attempt to kill da Gama went in vain], then makes an Urumi from the ornaments and gold of the women who were burnt alive in the ship. The pictorization of the anger and anguish in the eyes of the lad sets up the scene for REVENGE.

The little Kelu finds solace and protection at a Muslim’s house [Vavvaalli – Prabhu Deva]and they grow up together to become lifelong friends. The burning desire of Kelu to seek revenge against the foreigners, for killing his father, makes his path cross a beautiful lady warrior [Arrackkal Ayesha – Genelia D’souza]. To be honest, I have never been a big fan of this girl, she is cute and spritey, my memories run back to ‘Boys’, the first film I watched of her. Their quests and goals are common, romance brews, and Ayesha buys a lot of love from the viewers.

But it is Vavvaalli who grabs all the claps in the theatre. Humor has been subtle, yet handled well, without taking away any seriousness away from the history being depicted. Jagathy Sreekumar is no doubt the Complete Actor in this movie. If ever there is an acting manual, he did justice to his role as the ‘Advisor’ to the king emphatically. Words won’t do justice to his performance. Simply brilliant.

Nithya Menon enjoys wonderful screen time as the King’s daughter; though I was not too comfortable with her accent. Vidya Balan – as a mesmerizing deity, with a seductive dance number and some impactful dialogues in Malayalam [does fairly well]. Her acting skills sidelines Nithya Menon’s role. Tabu’s guest appearance in the song.. just left me feeling, a little too old maybe ;). 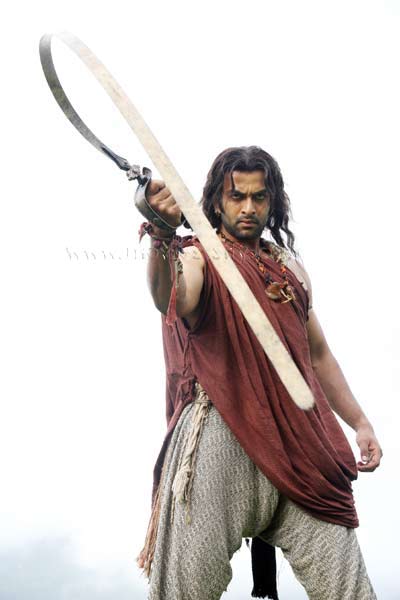 The epic battle, after fighting all odds, Kelu tries to take Vasco da Gama head on, and the visual treat is just brilliant. One has to take an evening off, head to a theatre and sit through 170 min. to really imbibe the Santosh Sivan stamp in Cinematography.

Raju needs to be given some slack. This is another feather to his career. I was really impressed with his work rate in this one. Santosh has tried to get the best out of him.

Genelia no doubt is my standout performer in this one. Beauty weilding a sword, slaying men all around, anger, anguish, revenge, love, fear. She portrays a lot of emotions. And as a warrior, she is simply gorgeous. It may not be the perfect movie, but it is definitely a must watch. Deepak Dev has done brilliantly with the score to keep the aura all throughout.