2011 has been refreshing for the Malayalam Film Industry. Movies like Traffic and Urumi are setting a new trend; a welcome change. This movie also carried the same expectations on it’s shoulders. Financial constraints, delay in release lead to a lack of available slots for the better theatres. My first futile attempt to watch this movie was the day the Endosulfan Hartal was on. Sadly the theatre playing the movie did not even open for first or second show that day. Grand theatre is not one of the preferred destinations to watch a movie in Kollam, considering its age, worn out seats and lack of effective air cooling. Finally yesterday I got myself to go for it, and was not too surprised to see that there were hardly 25 people in total [Don’t worry – not the movie’s fault – the general state of all movies in Kollam :)] which normally makes for a good comfortable viewing.

Lijo Jose Pellissery (@mrinvicible) ‘s second venture after Nayakan also revolves around a powerful  character showcasing Indrajith Sukumaran’s [@Indrajith_S] acting prowess. Lijo introduces the protagonists one by one through a road accident scene where incidentally all the characters are involved. The movie then rolls into flashback…. 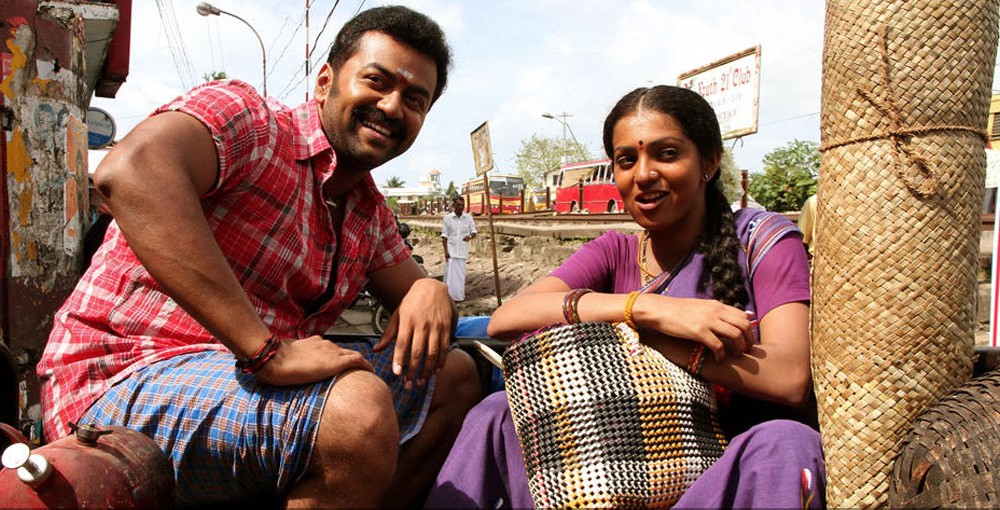 Swarnavel [Indrajith] is a Tamil immigrant who has settled in Kochi, loves his work, enjoys his daily wages and is a happy-go-lucky fellow. His raw love and affection for a fellow worker Marathakam [Parvathy Menon] and his desire to marry her makes him run into a lot of trouble.

Soorya [Rima Kallingal – @rimakallingal] is a film actor who’s trying to make it big in the industry. She is introduced  through a dance number being shot for the movie she is acting wherein she is seen adorning an array of beautiful dresses. She has a troubled marriage and has a history of a love relation that had gone sour with a businessman – one Mr. Sony Vadayaattil [Rajeev Pillai] who is madly in love with her. He wants to rekindle the relation he had with Soorya but she doesn’t oblige. He tricks her husband into owing him loads of money so that she would eventually agree to all his needs. In addition to this, she has to deal with the perils of the casting couch.

Jyothilal [Prithviraj] is a good friend of Sony and does all the dirty work for him. When a business deal with Mr. Punnoose goes sour, Sony seeks Jyothilal‘s help to ‘deal’ with Punnoose. Out in the open in the heart of Kochi , Jyothilal jumps the gun and slays him right in front of Mrs. Punnoose [Swetha Menon]. Mrs. Punnoose seeks revenge for the death of her husband and she plays with men of power in the city to ensure her husband is avenged.

The story develops centering around the love story of Swarnavel, Sony’s quest for getting Soorya back into his life and Mrs. Punnoose ‘s revenge. The journey is slow at times, but the action and suspense with an unorthodox way of story telling keeps the audience interested.

City of God’s unconventional approach might find divided opinion among the Malayalee audience, though in my opinion, Hollywood fans will appreciate the effort put in to make this movie. (Yup, I would recommend watching it rather than star studded disappointments like Chinatown).